The digital materials engage students in exploring history and education of the late 1890s, and making connections to today. This FREE virtual program includes:

While the materials are geared towards 4th grade students, homeschooling students of a variety of ages will enjoy engaging with the materials.

Contact eightsquare@thehistorycenter.net for more details about this program and materials.

This program invites children to explore what education was like in Tompkins County in 1892, and to reflect on how education has changed since. This living history program began in 1992 and is now part of the Kids Discover the Trail! programming, welcoming 4th graders from across the County. Over 800 children from the region’s public, private, and homeschools visit the schoolhouse each year.

The Eight Square Schoolhouse program is led by living history interpreters based in and inspired by 1890's curriculum. Students step back in time to engage in activities such as pen-and-ink penmanship lessons, reading aloud from primers of the day, and outdoor recess with period games. Once you register for the trip, the lead teacher will receive pre-trip and post-trip materials and activities to support student learning!

The program aligns with the NYS Social Studies Framework for fourth grade, as well as ICSD Anti-marginalization standards.

The philosophy of octagonal-shaped school buildings can be traced to a Quaker tradition brought over from the old country. The 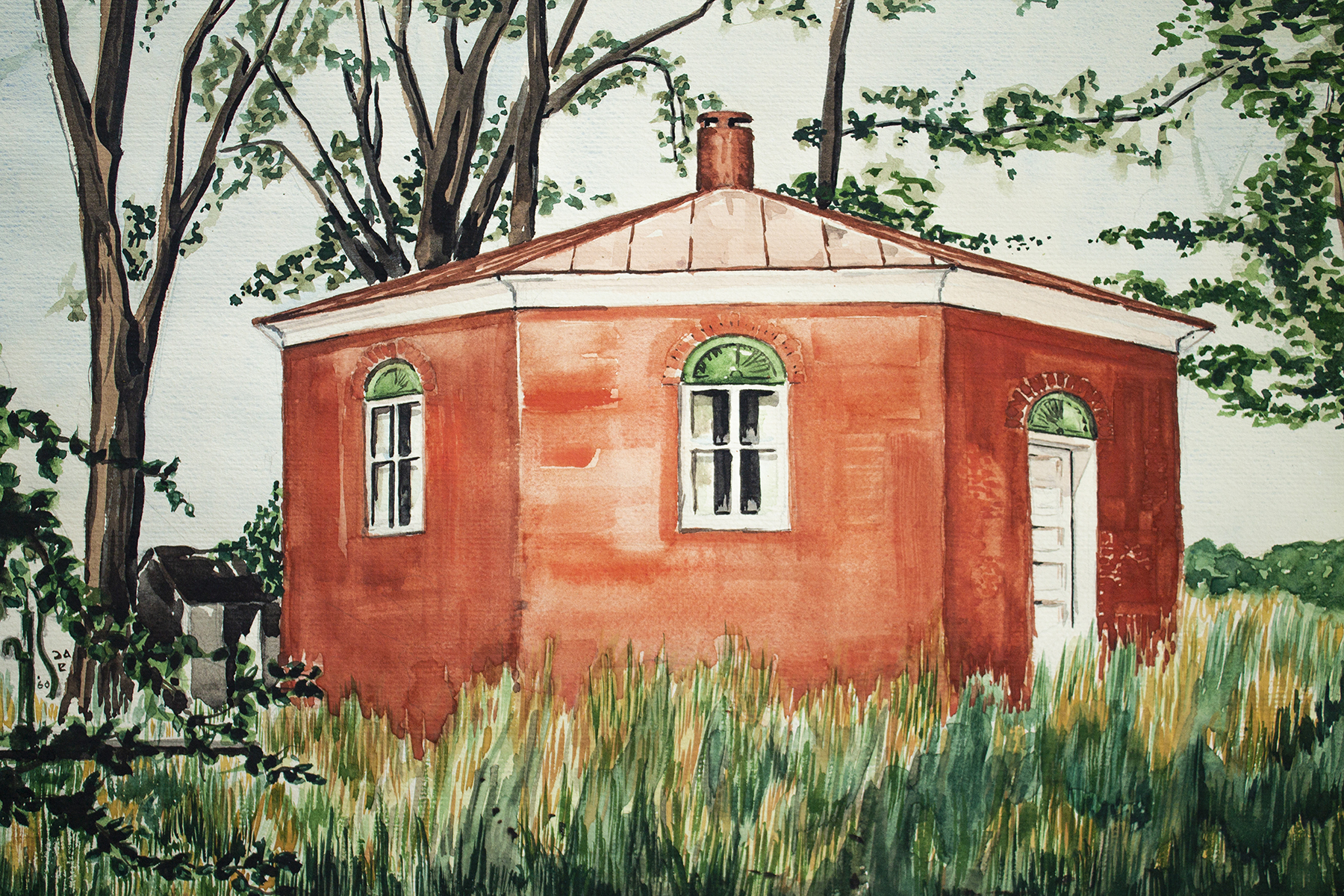 concept is based on the idea that an octagon shape was conducive to a better learning environment because the instructor could be placed in a prominent position within the space and be the focus of the students. It was also beneficial because the octagonal shape provided more square feet of inside space than either a rectangle or a square. Ventilation and lighting were also pertinent issues of the times, and an architectural structure with eight sides allowed for an opening in all sides of the building. The building's thick walls helped it to retain heat during the cold months, which also helped provide insulation against the heat in the warm weather.

A Brief History of the Eight Square Schoolhouse

Schools are and always have been the main social enterprise of any community. This centrality is illustrated by New York State’s directive to ensure that adequate funding be put aside for the establishment of schools when Tompkins County was first formed in 1817. These hubs of learning were scattered throughout the county; many were small one-room buildings placed in or near villages, hamlets and other population centers. Classes were often mixed, with older students sharing space, teachers, and resources with their younger sisters and brothers. It wasn’t until the mid-20th century that districts consolidated and small village schools were closed. Tompkins County and communities throughout the state established the modern public school system that we know today.

The Eight Square Schoolhouse stands on the ancestral homeland of the Cayuga Nation (Gayogo̱hó꞉nǫʼ, pronounced “Guy ah con nyo”), one of the Six Nations of the Haudenosaunee. We are grateful to be here on this land and recognize the importance of the Cayuga people historically, today, and in our future.

When this schoolhouse was built in 1827, Tompkins County was only ten years old. Slavery would be abolished in New York State on July 4th of that year. There were about 35,000 people living in Tompkins County, and most of them were farmers.

The Eight Square School replaced a wooden plank school that had been built on the same site in 1814. The old school was rundown and not nearly big enough for all the children. The trustees of School District #5 voted to move the old school down the road and begin building a new school made of brick.

They hired a man named Balcolm from McLean as their master builder and worked side by side with him to build a school that would be "twenty eight feet in the clear and eight square." Some of the early settlers of the area had come from the Delaware Valley originally and had probably seen similar octagonal buildings there.

The brick for the school came from the nearby brickyard of Jeremiah Snyder and from the Grover-Hammond Metzgar brickyard. The corner bricks were cast specifically for their octagonal shape, and the chimney bricks were cast in a circular form. The school cost $550.88 to build; the trustees had collected only $350 in school taxes for the building, so they had to raise additional money to pay the extra cost.

The Eight Square School served as a one-room school for the children of the district until 1941 when the Dryden School District centralized and began busing the children into Dryden or Freeville to attend school. The building was used as a community center and meeting place for another ten years. In 1955 the ownership of the school was transferred to the DeWitt Historical Society (DeWitt Historical Society became The History Center in Tompkins County in 2004). Stanley Warren, a Professor of Agricultural Economics at Cornell University, convinced the New York State Bankers to pay for needed repairs to the building. The Bankers had been visiting Eight Square with Warren every summer to learn first hand about changes in rural economy.

The school was mostly used for storage by the Society until the 1970s. In 1978 the Rural Schools Program at Cornell University chose the Eight Square Schoolhouse as their symbol because, as their brochure states "This stately structure depicts rural educational ideas for the eighties - quality education, dedicated teaching, relevant facilities, cooperative sharing, efficient operation, and community support." In 1979 the Cayuga Nature Center took over responsibility for programming on the grounds.

In the 1980s fourth grade teachers from across the county would take their classes to the school one day a year for an authentic field trip in a schoolhouse from the 19th century. In 1991 DHS developed a new and more historically accurate curriculum to be used for field trips at the school, and in 1992 DHS began hiring and training it's own teachers for the "Living History" program taught to all 4th graders in the county.

The Eight Square Schoolhouse is the earliest school structure still existing in Tompkins County, and the only brick octagonal schoolhouse left standing in New York State. In 1994 it was officially listed on the National Register of Historic Places and in 2000 became an official project of Save America's Treasures. Grant money awarded in 2002 from the Ithaca Rotary Club Community Grants Program enabled DHS to update it's Living History curriculum. The first-ever art installation project in the schoolhouse took place in the summer of 2002 for the 175th anniversary of the schoolhouse construction. Revisions were made to the Living History Program in 2019 to align with the Ithaca City School District’s Anti-marginalization standards.

Learn more about the history of Eight Square and other Tompkins County Schoolhouses through our New York Heritage Digital Collection.

Become A Teacher at The Eight Square Schoolhouse 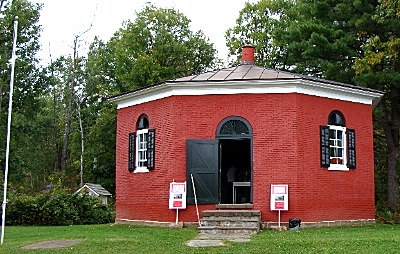 Take some local history, a landmark building, a flair for the dramatic and a roomful of kids – mix well and you will have an unforgettable trip to the past. The History Center is looking for teachers at our 1827 schoolhouse on Hanshaw Road in Dryden. In the spring and fall, area 4th grade and home school children spend a day immersed in rural one-room school education of over a century ago via our Living History program.

If you are interested in becoming part of our unique teaching team of historical interpreters, please email eightsquare@thehistorycenter.net